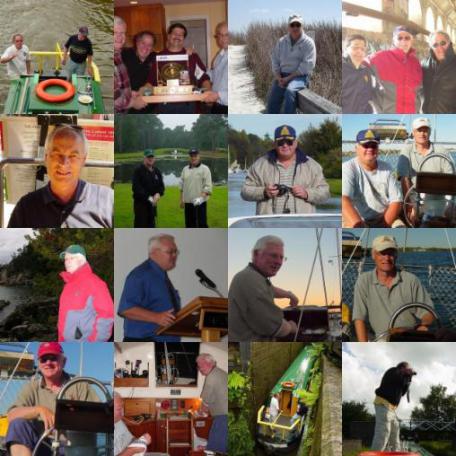 OUR EXPERIENCE and EXPERTISE:

Fred Ayea (1949 – 2013)
Friend, colleague, mentor, business partner, Fred Alyea passed away suddenly on June 12, 2013. We will miss your professionalism, hard work and wonderful wit. Thank you for those many years of memories.

David graduated from the University of Ottawa with a Bachelors of Arts in history. During his career with Parks Canada he had a series of positions on canals and in national parks including Canal Area Manager, Superintendent, and  Director of Operations.

As the Director of Operations for the Rideau Canal National Historic Site he had overall responsibilities for the lock operations and maintenance, navigation, water control, including the reservoir lake management, realty/land management, visitor activities and services and the natural resource conservation sections of the Canal.

In 1992 he received the Confederation of Canada 125th Anniversary Commemorative medal "in recognition of signifigant contribution to compatriots, community and to Canada".

David was the Parks Canada representative on numerous operational, navigational, land use or water supply and watershed studies which impacted or were of concern to Parks Canada throughout the Rideau Canal corridor and elsewhere. This usually meant representing Parks Canada mandate, interests and issues working with other levels of government and stakeholders. The work included being a member of steering committees and/or technical committees for studies such as the Lower Rideau Watershed and Tay River Watershed. David represented the interests of Parks Canada dealing with the restoration of older bridges and the design and building of new bridges owned by others, such as the City of Ottawa. The concerns he represented as a member of the design team related to the appropriateness, location and scale of the proposed bridge, along with a design that would be sympathetic to the cultural and natural context of an Historic Canal, and now a World Heritage Site.

In addition, he lead or played a key role in a number of large and nationally important Parks Canada studies on the mandate, organizational structure and needed efficiencies of the historic canals in order to continue a reasonable level of service while at the same time meeting the financial reality of the moment. David was involved at a local level where the work has been more canal, organization or function specific, including more recent operational and organizational reviews.

He was one of the Canal contacts during the managment plan processes for the Rideau Canal management plan during that time. The process included working with focus groups, stakeholders, special interest groups, residents, users and the general public to identify and outline the issues and possible solutions, inputting and reviewing the drafts and being a key part of the public consultation when the draft plan was presented for formal consultation and feedback.

In his capacity with Parks Canada and as president of Inland Waterways International he has been able to work on a professional basis with many peers and associates at various waterways and canals in North America, the U.K., Europe and China. David has been involved with the World Canals Conference over many years. He has been on the Steering Committees of many World Canals Conferences. He is a member of Council of Inland Waterways International and is presently the Past President.

As a partner in The Canals Group, David has been involved in various contracts in North America, U.K. Europe. He acts as an advisor to he World Historic and Cultural Canal Cities Cooperation Organization (WCCO), Yangzhou, China. He has been granted the honorary title of "Distinguished Guest of Yangzhou City", China for work done on behalf of Inland Waterways International with the WCCO.

Thomas X. Grasso, received his Bachelor of Arts Degree in Geology from the University of Buffalo and a Masters Degree in Paleontology and Stratigraphy from Cornell University in 1966. Tom worked at Chevron Oil Company in New Orleans, Louisiana until 1968 when he joined Monroe Community College, in Rochester, New York. He was chairman of the Geology Department from its formation in 1970 until he retired in 1999. A nationally and internationally recognized canal scholar.

Tom has authored numerous publications on New York State canals, French, British and German canals, and New York geology for both the professional and general audience press. He was recommended by Congresswoman Louise Slaughter and subsequently appointed a Commissioner to the U. S. National Park Service's Erie Canalway National Heritage Corridor Commission in 2002 by Secretary of the Interior Gale A. Norton. He was subsequently re-appointed in 2006 on the recommendation of Congressman Randy Kuhl.

In 1988 Tom received the prestigious SUNY Chancellor’s Award For Excellence In Teaching and in 2003 was presented the Medaille d’Honeur from the Mayor of the French city of Villeneuve-sur-Lot in the South of France. Since 1998 Mr. Grasso has been spearheading the Canal Society of New York State’s development project at Port Byron, New York which would be directly accessible from the New York State Thruway – Interstate 90. The site involves interpretation and restoration of the 1895 Erie House canal tavern, mule barn, blacksmith shop and old Erie Canal Lock 52 built in 1850.

In addition he is the author and chief proponent of the plan to remove Broad Street and restore the old Erie Canal to downtown Rochester, New York in its original bed across an 1842 aqueduct, plus connected to the existing New York State Canal System. Tom was Co-Chair of the World Canals Conference held in Rochester, New York 10 September to 15 September 2000. Over 400 delegates from over 15 different countries attended and participated in this world -class event. He has been selected Chair of the Executive Committee bringing the World Canals Conference to Rochester in 2010.

Tom bi-annually organizes and takes tours from North America to see the many diverse canals in Europe. Tom also writes a comprehensive guide as part of the tours, which becomes a commercial guidebook. He has successfully done this for a number of years, his most recent being to the canals of southern Germany in October 2010.

Tom can also be reached on his website http://eriecanalconsulting.com/ which specializies in all things Erie Canal.

Past President, The Canal Society of New York State

Dave MacDougall is a founding partner of The Canals Group, a registered partnership formed in 2007 to provide professional services in strategic and operational planning, operational reviews, public consultation and visitor program and facility planning.  Dave’s work in the private sector was preceded by a 34-year management career with Parks Canada in national parks, national historic sites and 24 years in the historic canals program in Canada focusing on management of both operations and external relations programs.

Dave’s career with Parks Canada provided a solid base for his role with The Canals Group.  With Parks Canada, Dave managed programs in operations, communications and external relations.  In an operational capacity he had responsibility for the protection of natural and cultural resources, the operation and maintenance of locks and dams, water management, staff and financial resources.  In the area of communications and external relations he applied his operations knowledge and experience to ground his management, development and delivery of programs and services to engage Canadians, visitors and stakeholders.  Dave represented management on multidisciplinary teams that developed public consultation and communications strategies where public consultation and engagement with the local community was vital to success.

Dave is a long-serving member of Council for Inland Waterways International and in 2016 completed his term as Secretary.  As a volunteer member of Council he actively supports its role to bring together people and organizations who support the conservation, use, development and proper management of inland waterways worldwide.  He is a regular attendee of the World Canals Conference and often participates in its program as presenter and session moderator.

In 2016 Dave was appointed to the World Historic and Cultural Canal Cities Cooperation Organization (WCCO) Expert Committee.  The organization, with its Secretariat in Yangzhou China, focuses on promoting economic and cultural development between canals cities, sharing in development experience and facilitating mutually beneficial cooperation and common prosperity.

Dave continues to be active in his community through involvement in volunteer organizations and sports, supporting wellness and participation to improve the quality of life locally.